Archaeology of the Boyhood Home of Joseph Smith, Jr., Palmyra, New York (Museum of Peoples and Cultures Occasional Papers No. 8)

2003 Large Softcover. viii, [2], 85, [1] pp. A scholarly study of the archaeology of Joseph Smith's boyhood home, designed to establish an idea of the socioeconomic conditions in which he was raised.
View More...

Environment and Archeology: An Introduction to Pleistocene Geography

First Edition. Former library copy - usual marks. Jacket rubbed. 1964 Hard Cover. A survey of the Pleistocene era with a focus on the relationship between man and land.
View More...

Dinosaur in a Haystack: Reflections in Natural History

First edition. Small ink mark to front endpaper. 1995 Hard Cover. We have more books available by this author!. Award-winning, bestselling author, evolutionary biologist, and paleontologist Stephen Jay Gould takes the art of the essay to an unprecedented height of excellence in this vibrant new collection of writings on science and natural history. From fads to fungus, baseball to beeswax, Gould always circles back to the great themes of time, change, and history, carrying readers home to the centering theme of evolution.
View More...

First edition. An exceptional copy. 2009 Large Hardcover. xxii, 641 pp. The second volume in a series dedicated to fossil discoveries made in the Afar region of Ethiopia, this work contains the definitive description of the geological context and paleoenvironment of the early hominid Ardipithecus kadabba. This research by an international team describes Middle Awash late Miocene faunal assemblages recovered from sediments firmly dated to between 5.2 and 5.8 million years ago. Compared to other assemblages of similar age, the Middle Awash record is unparalleled in taxonomic diversity, composed ...
View More... 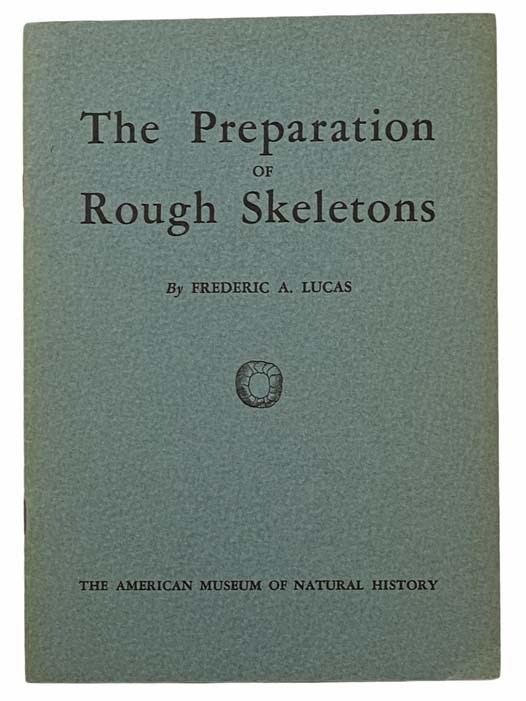 The Preparation of Rough Skeletons (Man and Nature Publications, 59)

By: Lucas, Frederic A.

An excellent copy. 1984 Large Softcover. We have more books available by this author!. Volume 2 of 2, including volumes 4-6 of the original limited edition. The Craig Mound is a treasury of early Native American artistry and the richest source of pre-Columbian shell engravings in North America. These lavishly illustrated volumes showcase the variety of iconography and of the engravers.
View More...

A nice copy. 1978 Large Softcover. We have more books available by this author!. Volume 1 of 2. The Craig Mound at Spiro, Oklahoma was the richest source of pre-Columbian shell engravings in North America, a treasury of early native American artistry. From about A.D. 1250 until the early part of this century, it remained virtually undisturbed, but in 1933, it was plundered by commercial diggers. The fragments of the shell cups and gorgets became widely scattered, as museums and private collectors sought to acquire them. It is only through the publication of this work that the pieces have been ...
View More...

By: Radinsky, Leonard B.

Dinosaurology: The Search for a Lost World (Ologies)

Edges lightly rubbed. 2013 Large Hardcover. Could dinosaurs still roam the earth? With this discovery in the ’Ology series, readers come face-to-face with living, breathing dinosaurs. What if dinosaurs had not died out? What if whole colonies of the prehistoric beasts had survived on a remote island off the coast of South America? This adventure in the best-selling ’Ology series offers young dinosaur lovers a tantalizing taste of what that would be like. The year is 1907, and young adventurer Raleigh Rimes is on an expedition to South America with real-life explorer Percy Fawcett. There he...
View More...