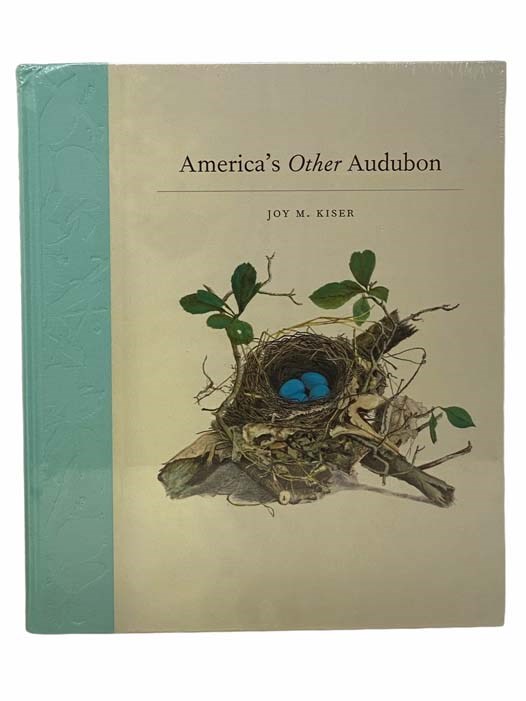 Bottom corner slightly dinged, but still in original plastic wrap. 2012 Large Hardcover. 192 pp. America's Other Audubon chronicles the story of Genevieve Jones, her family, and the making of an extraordinary nineteenth-century book, Illustrations of the Nests and Eggs of Birds of Ohio. At the age of twenty-nine, Genevieve Jones, an amateur naturalist/artist and daughter of a country doctor, visited the 1876 Centennial World's Fair in Philadelphia, where she saw Audubon's paintings in Birds of America on display. His artwork inspired her to undertake the production of a book illustrating the birds nests and eggs that Audubon neglected to include in his work. Her parents were reluctant to support the undertaking of such an ambitious and expensive project until Genevieve became despondent over a broken engagement. Concerned over her fragile mental state, they encouraged her to begin the book as a distraction. Her brother collected the nests and eggs, her father paid for the publishing costs, and Genevieve and her girlhood friend learned lithography and began illustrating the specimens. The book was sold by subscription in twenty-three parts. When part one of Genevieve's work was issued, leading ornithologists praised the illustrations, and Rutherford B. Hayes and Theodore Roosevelt added their names to the subscription list. One reviewer wrote: It is one of the most beautiful and desirable works that has ever appeared in the United States upon any branch of natural history and ranks with Audubon's celebrated work on birds. Then, suddenly, Genevieve died of typhoid fever after personally completing only five of the illustrations. Her family took up the completion of the work in her memory. They labored for seven years until the book was completed in 1886; collecting nests and eggs, drawing lithographs on stone, and hand coloring fifty copies of each illustration, and writing the field notes for each species of bird. Both the brother who collected the nests and eggs and wrote the field notes, and the mother who completed the drawings on stone and hand coloring, were stricken with typhoid fever two years after Genevieve's death and nearly died. In spite of serious damage to their health, they never gave up and labored until the book was finished. The father covered the publishing costs, which were higher than had been anticipated and were not covered by the subscription price, and ultimately lost his entire retirement savings completing the task in his daughter's memory. The mother lost her eyesight at the end of her life from the effects of typhoid fever and long hours of straining to draw and color the nests and eggs. But neither parent ever complained and considered their work on the book the most important accomplishment of their lives. When the mother's copy of the volume was exhibited on the Chicago World's Fair in 1893, it was awarded a bronze medal. Only 90 copies of the book were produced and fewer than 20 have been located today in libraries or in private collections. America's Other Audubon includes a foreword by the Curator of Natural-History Rare Books at the Smithsonian, Leslie Overstreet, a prologue and introduction by researcher and writer Joy M. Kiser (with archival photographs of the family and original advertisements and ephemera from the publication and sale of the book), the 68 original color plates of nests and eggs, plus selected field notes, a key to the eggs, and a key to the birds scientific and current common names (which have changed since the book first published in the nineteenth century). Joy Kiser has been friends with the Jones ancestors for fourteen years and has access to family photographs and documents that the general public has never seen. The Joneses story has never been fully told and no other author is better prepared to tell it.

The Art of Audubon: The Complete Birds and Mammals