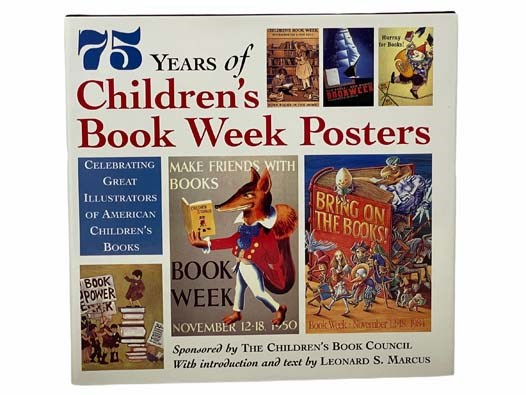 First edition. A fine copy in a fine jacket. 1994 Large Hardcover. xxii, 74 pp. From Jessie Willcox Smith and N. C. Wyeth to Maurice Sendak and Chris Van Allsburg, Children's Book Week posters tell the story of children's books in America. Here, in one glorious volume, are all sixty-nine posters, truly a celebration of great American children's book illustrators. Over the last seventy-five years, Children's Book Week has grown from a modest grass-roots effort to the present-day nationwide annual celebration of literacy and the pleasures of reading. The posters, which are commissioned and distributed each year by the Children's Book Council, encourage reading by children and, in turn, reflect a nation struggling with the responsibility of educating its young. The history, social climate, and wider concerns of the country can be traced through the posters, from the idyllic scene of innocent childhood in Jessie Willcox Smith's poster for 1919 to the heroic stridency of the Petershams' image for 1940; from the first appearance of an African-American child in Adrienne Adams's poster for 1963 to the image of children protesting in Emily Arnold McCully's 1969 poster. The posters also reflect the development and growth of the publishing industry. In 1919, books for children were a marginal part of publishing; the increased awareness of the importance of books, supported and encouraged by the Children's Book Council, has led, in part, to today's vital and independent children's book industry. Some poster artists represented here are primarily children's book illustrators who, after appearing as poster artists, went on to win the Caldecott Medal - such as Maud and Miska Petersham, Marcia Brown, Alice and Martin Provensen, and Maurice Sendak. Others achieved fame in different ways: Joseph Binder was an internationally renowned poster artist who also created the official poster for the 1939 New York World's Fair; Bruno Munari is, among other things, an industrial designer whose household objects are in the permanent collection of the Museum of Modern Art; and Paul Rand is one of the country's foremost practitioners and teachers of graphic design. An introduction by noted historian, biographer, and critic Leonard S. Marcus provides a fascinating and involving look at the history of children's books. He chronicles America's idea of childhood as reflected by the range of books available to children and in the artists and images selected for the posters. And using the posters as guiding lights, he weaves the history of the nation and the industry into a cohesive whole. His fascinating captions for each of the sixty-nine posters provide detailed and little-known facts about the artists.--jacket

Wake Up, America!: World War I and the American Poster

The Slice: Information with an Attitude! (As Featured in Willamette Week)

A Week on the Concord and Merrimack Rivers

A Week on the Concord and Merrimack Rivers; Walden; or, Life in the Woods; The Maine Woods; Cape Cod (The Library of America 28)