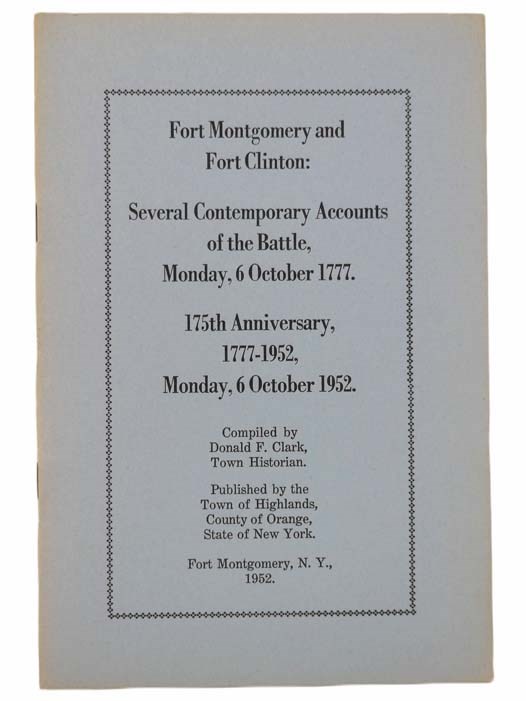 Minor general wear. 1952 Stapled Binding. 16 pp. The Battle of Forts Clinton and Montgomery was an American Revolutionary War battle fought in the highlands of the Hudson River valley, not far from West Point, on October 6, 1777. British forces under the command of General Sir Henry Clinton captured Fort Clinton and Fort Montgomery, and then dismantled the Hudson River Chain. The purpose of the attack was to create a diversion to draw American troops from the army of General Horatio Gates, whose army was opposing British General John Burgoyne's attempt to gain control of the Hudson. The forts were garrisoned by about 600 Continental Army troops under the command of two brothers, General (and Governor of New York) George Clinton, and General James Clinton, while General Israel Putnam led additional troops at nearby Peekskill, New York. (This battle is also sometimes called the battle of the Clintons due to the number of participants with that name. The brothers were probably not related to Sir Henry.) Using a series of feints, Henry Clinton fooled Putnam into withdrawing most of his troops to the east, and then he landed over 2,000 troops on the west side of the Hudson to assault the two forts. After several hours of hiking through the hilly terrain, Clinton divided his troops to stage simultaneous assaults on the two forts. Although the approach to Fort Montgomery was contested by a company armed with a small field piece, they attacked the two forts at nearly the same time and captured them after a relatively short battle. More than half the defenders were killed, wounded, or captured. The British followed up this success with raids as far north as Kingston before being recalled to New York City. The action came too late to be of any assistance to Burgoyne, who surrendered his army on October 17. The only notable consequences of the action were the casualties suffered and the British destruction of the two forts on their departure.--Wikipedia