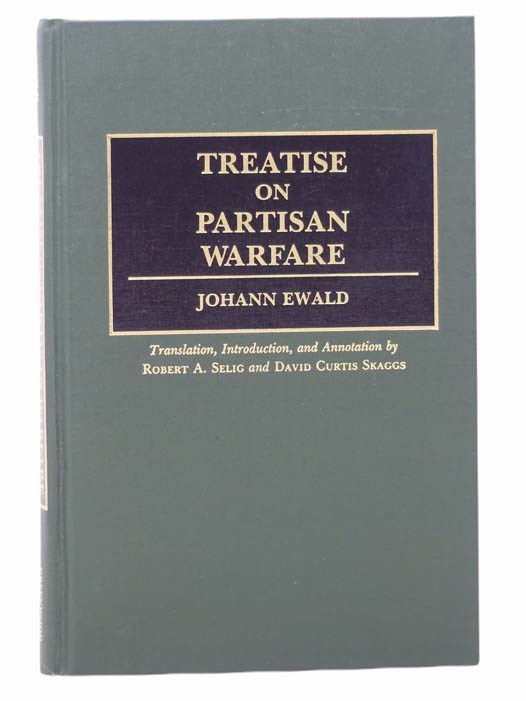 First American edition. Edges lightly foxed, small owner bookplate on front endpaper. 1991 Hard Cover. x, 178 pp. This translation of Johann Ewald's classic essay, Abhandlung Uber den kleinen Krieg, published in 1785, describes light infantry tactics in an era of heavy infantry formations. Robert Selig and David Skaggs comment on Ewald's treatise on partisan warfare and its relevance to current military doctrine. They also provide extensive scholarly notations with the text, explaining people, places, and events during the Seven Years' War and the American Revolution, where Ewald had extensive experience as a company commander in the Hessian Field Jaeger Corps. This first English translation should be of real interest to historians of American Revolution and pre-Napoleonic warfare and of special use to military professionals today in the Army and Marine Corps. Captain Ewald, eventually a Major General in the Danish Army, describes the recruiting and training of light infantry troops, and discusses their use both in the Seven Years' War and the American Revolution at length. He provides illuminating insights into light infantry tactics and doctrine.

The Golden Cross: A History of the 33d Infantry Division in World War II [33rd]

A Fragment of Victory in Italy: The 92nd Infantry Division in World War II - A Special Study Concerned with the 92d Infantry Division and Its Principal Attachments, Including the 473d and 442d (Japanese-American) Infantry Regiments (Thirty Ninth in the Divisional Series)

Baunscheidtismus or The New Curing Method, Improved by Dr. J. Firmenich, to which is added a Treatise on the Eye, its Diseases and Cure.