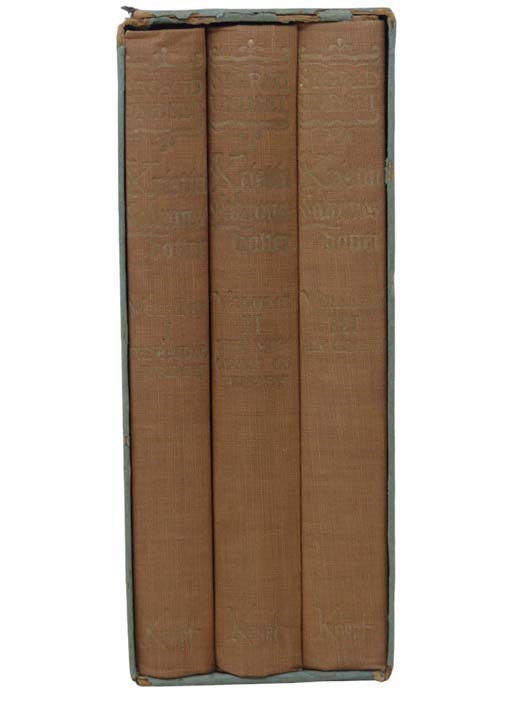 Book club edition. Includes publisher's slipcase. Original book club receipt laid in. Spines faded, slipcase edges a bit rubbed, top slipcase seam repaired. 1946 Hard Cover. 1043, i pp. Three 8vo volumes, paginated continuously. A historical novel in three parts, depicting Scandinavian life during the Middle Ages, by the Norwegian author and winner of the 1928 Nobel Prize in Literature. ABOUT THE AUTHOR: Sigrid Undset (20 May 1882 – 10 June 1949) was a Norwegian novelist who was awarded the Nobel Prize in Literature in 1928. Undset was born in Kalundborg, Denmark, but her family moved to Norway when she was two years old. In 1924, she converted to Catholicism and became a lay Dominican. She fled Norway for the United States in 1940 because of her opposition to Nazi Germany and the German occupation, but returned after World War II ended in 1945. Her best-known work is Kristin Lavransdatter, a modernist trilogy about life in Scandinavia in the Middle Ages. The book was set in medieval Norway and was published from 1920 to 1922 in three volumes. Kristin Lavransdatter portrays the life of woman from birth until death. Undset was awarded the Nobel Prize in Literature for this trilogy as well as her two books about Olav Audunssøn, published in 1925 and 1927. Undset experimented with modernist tropes such as stream of consciousness in her novel, although the original English translation by Charles Archer excised many of these passages. In 1997, the first volume of Tiina Nunnally's new translation of the work won the PEN/Faulkner Award for Fiction in the category of translation. The names of each volume were translated by Archer as The Bridal Wreath, The Mistress of Husaby, and The Cross, and by Nunally as The Wreath, The Wife, and The Cross.

Title: Kristin Lavransdatter: The Bridal Wreath, The Mistress of Husaby, The Cross