3rd printing. Very good book in fair jacket. Large chip from front jacket corner. Jacket now protected under fresh mylar. Owner sticker on front endpaper. 1968 Hard Cover. We have more books available by this author!. 302 pp. 8vo. Includes section of black & white photographs, maps on endpapers. The first book the Pulitzer Prize-winning author. David McCullough is known to millions as the author of the critically acclaimed, best-selling books The Great Bridge, The Path Between the Seas, and Mornings on Horseback, and as host of the popular PBS television series 'Smithsonian World?' The Johnstown Flood, David McCullough's first book, was praised by Time magazine as a 'meticulously researched, vivid account of one of the most stunning disasters in U.S. history.' At the end of the last century, Johnstown,.Pennsylvania, was a booming coal-and-steel town filled with hard-working families striving for a piece of the nation's burgeoning industrial prosperity. In the mountains above Johnstown, an old earth dam had been hastily rebuilt to create a lake for an exclusive summer resort patronized by the tycoons of that same industrial prosperity: among them Andrew Carnegie, Henry Clay Frick, and Andrew Mellon. Despite repeated warnings of possible danger, nothing was done about the dam. Then came May 31, 1889, when the dam burst, sending a wall of water thundering down the mountain, smashing through Johnstown, and killing more than 2,000 townspeople. It was a tragedy that became a national scandal. From research in the voluminous records, diaries, letters, interviews with numbers of survivors, and a rare, previously unknown transcript of a private investigation conducted by the Pennsylvania Railroad, David McCullough vividly re-creates the chain of events that led to the catastrophe, and then unfolds the incredible story of the flood itself and its aftermath. Graced by David McCullough's remarkable gift for writing richly textured, sympathetic social history, The Johnstown Flood is an absorbing, classic portrait of life in 19th-century America, of overweening confidence, energy, and tragedy. It also offers a powerful historical lesson for our century and all times: the danger of assuming that because people are in positions of responsibility they are necessarily behaving responsibly.

Title: The Johnstown Flood [The Incredible Story Behind One of the Most Devastating 'Natural' Disasters American Has Ever Known]

History of the Johnstown Flood, Including All the Fearful Record; The Breaking of the South Fork Dam; The Sweeping Out of the Conemaugh Valley; The Overthrow of Johnstown; The Massing of the Wreck at the Railroad Bridge; Escapes, Rescues, Searches for Survivors and the Dead; Relief Organizations, Stupendous Charities, Etc., Etc.

History of the Johnstown Flood, Including All the Fearful Record; The Breaking of the South Fork Dam; The Sweeping Out of the Conemaugh Valley; The Overthrow of Johnstown; The Massing of the Wreck at the Railroad Bridge; Escapes, Rescues, Searches for Survivors and the Dead; Relief Organizations, Stupendous Charities, Etc., Etc. 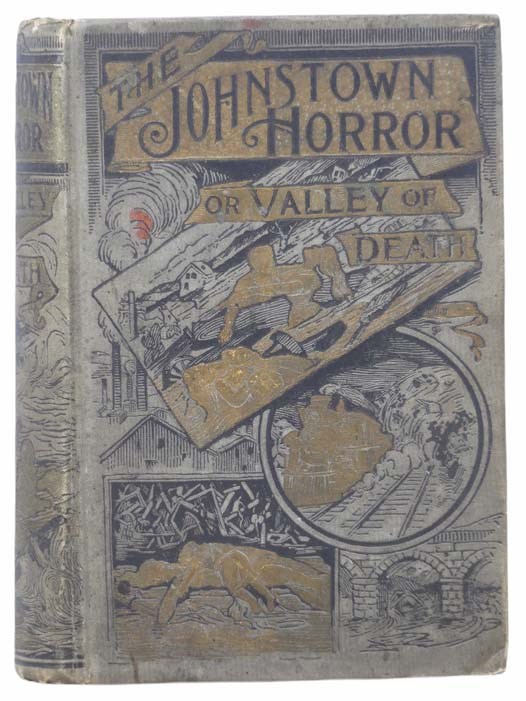 The Johnstown Horror!!!; or, Valley of Death, Being a Complete and Thrilling Account of the Awful Floods and Their Appalling Ruin. Containing Graphic Descriptions of the Terrible Rush of Waters; the Great Destruction of Houses, Factories, Churches, Towns, and Thousands of Human Lives; Heart-Rending Scenes of Agony, Separation of Loved Ones, Panic-Stricken Multitudes and Their Frantic Efforts to Escape a Horrible Fate. Comprising Thrilling Tales of Heroic Deeds; Narrow Escapes from the Jaws of Death; Frightful Havoc by Fire; Dreadful Sufferings of Survivors; Plundering Bodies of Victims, etc., together with Magnificent Exhibitions of Popular Sympathy; Quick Aid from Every City and State; Millions of Dollars Sent for the Relief of the Stricken Sufferers. Fully Illustrated with Scenes of the Great Calamity.